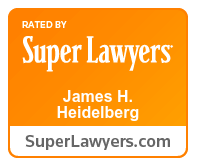 James H. Heidelberg is a lifelong resident of Pascagoula, Mississippi, and he has practiced law in Pascagoula since his admission to the Bar in January 1978. His practice primarily involves trial and appellate litigation in the fields of personal injury, governmental law, and professional liability. Mr. Heidelberg has briefed or argued over eighty cases to the Mississippi Supreme Court, the Fifth Circuit Court of Appeals, and the United States Supreme Court. Mr. Heidelberg represents several Mississippi governmental agencies and political subdivisions and is an approved attorney for the Mississippi Tort Claims Board. He is an approved arbitrator for both the Mississippi Bar’s Court Annexed Mediation Project and the National Association of Security Dealers (NASD). Mr. Heidelberg maintains an active mediation/arbitration practice and provides governmental and policy consultation to state and national clients, as well as advice to governmental entities and public officials.

Mr. Heidelberg has held an “AV” rating in Martindale-Hubbell since 1994 and has been listed in “The Best Lawyers in America” since 1999. In 2003, he received the Mississippi State Bar Distinguished Service Award. He is listed annually in the publication “SuperLawyers – Mid-South Edition.” He is also included in “Best Lawyers in America” in seven fields of practice, such as Appellate Practice, Environmental Law, Legal Malpractice (Defense), Medical Malpractice (Defense), and Personal Injury (Defense). In 2013, he was selected as “Lawyer of the Year” in the area of Medical Malpractice, and in 2016, he was selected as “Lawyer of the Year” for the Mississippi Gulf Coast in the area of Personal Injury Litigation.