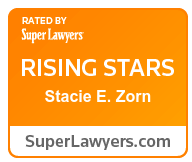 Stacie E. Zorn was born in Pascagoula, Mississippi and is a lifelong resident of Jackson County. She received a Bachelor of Science in Psychology from the University of Southern Mississippi in 1999. She received her Juris Doctorate Degree from the University of Mississippi School of Law in 2003. While in law school, Ms. Zorn was member of the Public Interest Law Clinic and the Delta Theta Phi Fraternity, serving as President in 2002-2003 and Treasurer in 2001-2002.

Ms. Zorn focuses her practices on three primary areas of law: federal and state employment law litigation, estate law and probate, and family law. Ms. Zorn represents employers before administrative bodies and courts concerning claims of discrimination, harassment, retaliation, wrongful discharge, and workers’ compensation. Ms. Zorn regularly advises employers regarding personnel matters including policies and procedures, leave entitlement, discipline and discharge, and compliance with state and federal law including, but not limited to, Title VII of the Civil Rights Act of 1964, the Americans with Disabilities Act, the Age Discrimination in Employment Act, the Family and Medical Leave Act and the Fair Labor Standards Act. Ms. Zorn was named a Super Lawyers Mid-South Rising Star® in the area of Employment Law from 2012-2017. Ms. Zorn also serves the 16th Chancery Court District of Mississippi as a Family Master and the City of Ocean Springs as Municipal Court Judge, Pro Tem.

Ms. Zorn is a member of St. John’s Episcopal Church where she serves as a Children’s Chaplain. In her free time, she enjoys spending time with her family, boating and playing tennis.